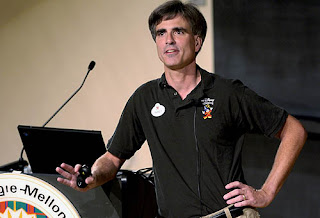 The video begins with Mr. Pausch talking about his condition with liver tumors. The doctors have only given him 4- 6 months to live. This is a lot to handle in the beginning of this video. It is unexpected and he doesn't seem to be bothered by his condition. He is in good health as of right now and even gets down and does some awesome push ups. This makes the crowd and my self laugh. He asks for us not to pity him. He is excited about the lecture.


This lecture is about how to achieve your dreams and how to help others achieve theirs. This is very important as a teacher. Mr. Pausch makes a great analogy of being eight or nine years old and watching men land on the moon. This is so important because he thought anything was possible after seeing such a sight. This is important to remember because I believe sometimes we forget that anything really is possible. Mr. Pausch is doing a great job inspiring people to achieve their dreams.


Mr. Pausch explains his personal experiences with achieving his dreams and they are pretty inspirational. He talks about when he was young and wanted to "go to the moon". Well, he got to experience zero gravity and work with NASA on some project. He checked that of his list of dreams. His second dream was to play NFL football. That dream was never achieved buy he feels he learned more from practice and just playing the sport. He believes he achieved more valuable things than playing NFL football.


Mr.Pausch wanted to be an imagineer. He wanted to make stuff like Disney world. He said this was more difficult than experiencing zero gravity. He applied to Disney buy was denied. He eventually got the opportunity to work on an Aladdin project after going through many, many people. He loved imagineering. It was fabulous he says! You just walk around and get inspired.


He talks about how he helped Tommy achieve his childhood dream of working on the Star Wars moving. Mr. Pausch is a very inspirational man.  He should be the poster child of nothing is impossible. I am so impressed with everything Mr. Pausch as accomplished. He truely has done everything he has wanted to do. It wasn't easy, but he has been so successful. He truly is an inspiration to me. I would like to hear more from him. He is great! He closes with saying that its not about achieving your dreams, its about how you lead your life. This was an excellent lecture. He is a great man!
Posted by Leigh Setser at 3:38 PM

Leigh Setser
My name is Leigh Setser and I am an elementary education major at the University of South Alabama. I will graduate with my degree in May 2012.